My one regret: I didn’t interview Maya Angelou when I had the chance.

When I look at this picture of myself, my eyes, what I see emanating from them is my curious spirit encouraged by Maya Angelou’s autobiographies and poems.

My life hasn’t quite turned out as I had thought it would have. But even so, I don’t have regrets with the exception of one. In my twenties I had wanderlust. I wanted to travel and see the world, not merely as  a tourist but to live in and experience different cultures; I wasn’t as focused on getting married or owning a home as many of my friends at the time. I quite frankly wasn’t sure where I would end up but I needed the freedom to pursue my dreams. I  was not the norm.

But when I read Maya Angelou’s Heart of a Woman, and her adventures from the USA to Africa, I found a kindred spirit. Her life choices made me feel ok to have this spirit of mine. I devoured her books and poems – fed my soul and travelled and lived in different  countries.  And I knew I just had to meet her. I felt it was only a matter of time, especially when I was living in Atlanta in the 90’s when it became the Black mecca for professionals and the start of the entertainment hub it has become. It wasn’t unusual to see a celebrity sitting across from me in a restaurant; and being an editor and writer, I met several through work, who became long time friends. So it seemed very possible. I had even called to set up an interview, but I don’t remember what happened at the first time.  I didn’t sweat it because I thought there was time.

Fast forward, I was back in Toronto, launched lisaliving.com as a lifestyle magazine. I called to set up an interview that I wanted to do in person. I would have to get to North Carolina, but it wasn’t in my budget. But I had time. Time. Believing I had time and “life stuff”…put it in on the back burner.  Until time ran out. She passed away.

It’s the one thing that I get mad at myself about when I think about it. And it has become my one regret – because I wanted her to know just how much she affected my life, how much I admired her courage, her strength and her vulnerability.

My regret, is now my lesson … I cannot change the way it played out, but I know that if a similar situation comes about, I will use that “time” to make it happen.

Liked what you read...spread the love.
follow your dreamslife lessons
6 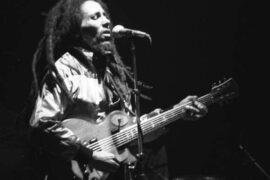 Don’t Worry about a Thing: Bob Marley Brought Me Peace

Are You Crazy/Bold Enough to Wear Two Different Shoes?